THE PORTRAIT OF LATVIA

The wonderful forests and lakes, as well as charming historical towns and dynamic cities of Latvia, situated between the two other Baltic States, have been explored by few travellers. However, Riga, the interesting capital of the country and the largest city in the Baltic region, attracts crowds of tourists from the Western Europe all year round. Riga allures its guests with cultural treasures and hedonistic night life.
Long before the arrival of the German crusaders (1201) local Latvian tribes used to keep trading relations with merchants from distant lands (as far as the Byzantine Empire), while from the East the country was invaded by Orthodox Christianity. Yet it was exactly the crusaders that began the era of foreign domination, which took eight hundred years. The short period of independence at the beginning of the 20th century ended with the invasion of the Nazi Germany and then - Soviet Russia. The Soviet period was marked with rapid industrialization, while the restoration of the independence in 1991 has quickened the country's modernization. Despite of all the difficulties, foreign attacks and essential regional differences, Latvians managed to maintain and develop their culture. They have also managed to maintain the connection to the nature, which reflects long centuries of rustic toil. Having reconciled with the social, economic and political heritage of the 20th century, the country has confidently stepped in to the 21st century. The historical centres of Riga and other major cities were reconstructed, while rural regions started to develop eco-tourism.

The country has 2.3 million of inhabitants, the largest ethnic groups of which are Latvians and Russians, 58 and 29 percent respectively. Although many Russians live in the major cities, a large part of them do not have Latvian citizenship, because they have not passed compulsory language and citizenship examination. Among other ethnic minorities there are Lithuanians, Poles, Belorussians and Ukrainians. The majority of the Latvian Jews were killed or fled during the Second World War, although some of the survivors returned and formed small Jewish communities.

The echoes of the Latvian pagan past can be heard even today, most notably during the fiery celebrations of St. John's day. Even the urban population professes relationship with nature. This is reflected by the habit to present flowers and, by the way, it is important to make sure that the bouquets presented consist of an uneven number of flowers, as the even number is associated with funerals.
Latvians were never too much interested in religion and only about one third of the population today consider themselves as Christians, mostly Evangelical Lutherans.

The restoration of the independence in Latvia gave rise to dozens of political parties, which one after another formed short-term centre-right coalition governments. The end of the communistic reign did not automatically mean the end of the deeply rooted corruption, thus a handful of powerful oligarchs used their political influence for personal financial interests. All these events have shaped general public scepticism towards the political system.
Soviet Union tried to turn the agricultural land into a country of heavy industry thus the cities were flooded with a large number of Russian workers. When the soviet planned economy collapsed, Latvian goods suddenly lost their market. In 1995, when four newly privatized banks went bankrupt, the country sank into crisis. However, privatization, economic reform and low wages stimulated rapid growth of the country. Many raw materials, except wood, are imported, while the industry thrives thanks to foreign investors. The export goods include pharmaceuticals, wood, textile, electronic goods, ships, dairy products, beef and grain. Latvia uses the status of the East-West trade centre, the oil transit from the former Soviet Union to the Western Europe brings especially a lot of profit.

The quickly developing tourism makes a very noticeable change in the country during the recent years. Although many places in Latvia have not been visited by foreigners yet, Riga has now firmly established itself on the map of tourism. The city is serviced by several airlines, among which there are cheap carriers as well. The blocks around the old-town are adapted for increasing flows of tourists. The city aims to regain the precious epithet of the "Northern Paris", which it used to share with some of the other European cities many years ago.
Yet it seems that the greatest tourism development opportunities lie beyond the city, in the domain of undisturbed peacefulness of lakes and rivers. More and more farmers offer tourism services. 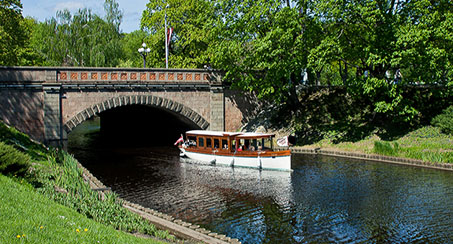 Traveling in the Baltic States

Where'll be your next journey?

Traveling in the Baltic States